Here we are in France – the land of baguettes and cheese.

We find ourselves in Idaux-Mendy, the basque region of south west France in the foothills of the Pyrenees . This is where you can find those quaint picture postcard little villages where very little (if any) english is spoken.

We are here for 10 days staying in a 300 year old renovated farmhouse with an attached large barn. Our pets for this house sit are Ulysse – a 3 legged Labrador, Izzie – a Jack Russell and two barn cats. We never saw the cats, I think they were having too much fun chasing mice in the fields.

Ulysse is a 7 year old rescue dog. Sadly he was mistreated by his previous owners and lost his leg by being run down by them. How people can do that to their pets is beyond comprehension. Despite this, he is a very gentle and kind natured dog. We affectionately referred to him as ‘the big lug’. Unusually, he had lost one of his front legs which meant as he walked or ran all of his weight would go through his front shoulder joint. As such we had to be mindful of making sure he didn’t overdo things. It was quite amazing to see him dig in the corn fields with just one front leg!

Izzie is a fiesty 4 year old Jack Russell who runs as fast as a greyhound. She loved tummy rubs and would just ‘drop’ at your feet and roll over onto her back. She’s also the boss of Ulysse and I watched with surprise when she trotted up to Ulysse and took the bone from his mouth while he was chewing it! Izzie became nicknamed  ‘the mouse catcher’ as she presented us with a dead mouse after spending her first night in our bedroom.

Due to Ulysse’s condition he required pain medication every 2 days and daily glucosamaine for his joints/arthritis. He was allowed treats but we were advised to give them minimally as being overweight is not good for his joints either. Ulysse would eat practically anything and one healthy snack he was allowed, was an apple.

Izzie was the opposite. She didn’t eat much at all. But then, maybe she was snacking on the mice she caught?

Each morning we would take Izzie & Ulysse for a 30 minute walk around the local farmers corn fields. Any longer and Ulysse would be ‘limping’ home. Along the walk, Ulysse would find a muddy puddle and drop himself in it, to cool down and have a drink. Izzie would sprint up and down the path and disappear into the corn fields only to re-appear somewhere further up the path. At the end of each walk Ulysse would receive his post-walk wash down before being  allowed back into the house. 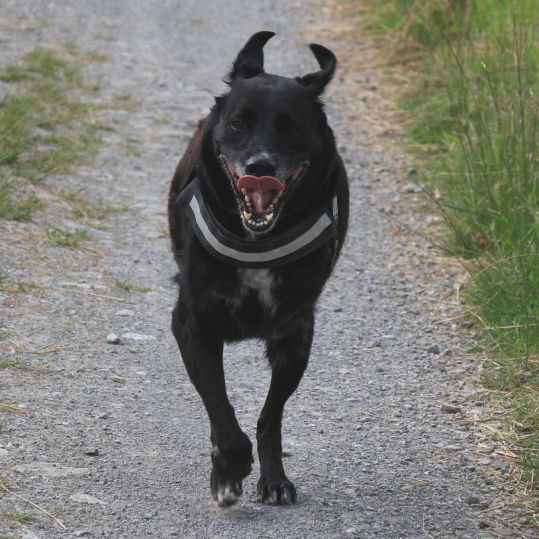 The home was situated on an acre of land and had a number of large vegie beds and a lovely big pergola area with a number of grapevines growing over it. We enjoyed spending time in their garden pruning, weeding the vegie garden and eating some delicious cherry tomatoes.

Our local town was Mauelon which was about 10 minutes away. It was very pretty town with plenty of shops, a river winding through it and a castle overlooking it too! Here’s a couple of pics…

We explored our local area which was full of history (due to it’s close proximity to Spain and the various historical border conflicts over the centuries) and amazing places to visit. We didn’t need to drive more than 30-45 minutes to see some beautiful places. We visited Sauveterre-de-Bearn, a medieval city with history and buildings dating back to the 11 century and Navarrenx, the first fortified town in France dating back to the 15th century. A highlight was La Verna cave, the world’s largest cave that is open to the public. It was opened in 2010 and is so ‘new’ that many locals don’t even know about its existence. It is so large that they have had a hot balloon fly inside it! Finally there was our epic walk to the suspension bridge “Le Pont Suspendu d’Holzarteto” over the gorge at Larrau.

House sitting has its responsibilities to the pets and the owners home, but it also provides an opportunity to explore local sights, immerse yourself in the local culture and get a taste of local sights – many of which are not on the standard ‘tourist’ trail.

We had a great time in France with Ulysse and Izzie and hope to visit this part of the world again in the future.

What the owners said – “…We came home to happy dogs, clean home (and my ironing done which was amazing!) plus loads of gardening done which was well above and beyond but for which we were really grateful (Glenn could see I needed help!)…”

View all posts by Glenn Lamb